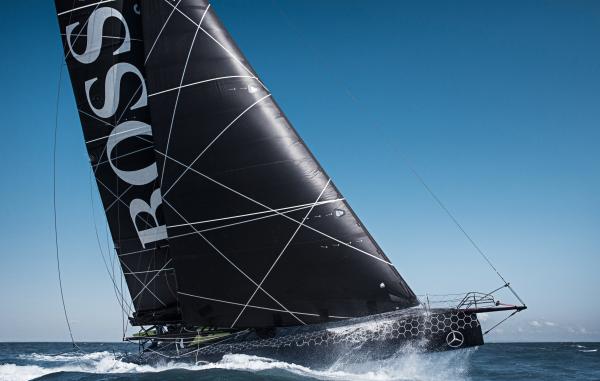 Richard Bouzaid,  Head of Design at Doyle Sails New Zealand, has recently returned from a week of sail trials on board the newly repaired Hugo Boss, which is  freshly out of the shed following the completion of repairs sustained in the capsize in the Transat Jacques Verbal Race in October 2015. Bouzaid joined skipper Alex Thomson to make up a crew of six on board the yacht, which included another member of the Doyle Sails NZ team Sam Molesworth, to put her through her paces and ensure the boat, her rig and sails were all running at 100 per cent.

“After departing Gosport in the UK, the boat headed west to break through a front, sailed upwind for a few days and then south downwind reaching and running in very testing conditions,” says Bouzaid. “There were high wind speeds with 20 to 30 knots of wind and we really put the boat though her paces – she certainly got a very thorough structural test but everything went incredibly well with no issues.”

Hugo Boss carries a full inventory of Doyle Sails and following the capsize the Doyle team replaced the main sail and J2, with the rest of the sails still in perfect condition. Bouzaid and the Doyle team work closely with Alex on his sail wardrobe, spending significant time on board the yacht with Alex to ensure everything is working perfectly. “Spending the full week sailing with Alex was a great opportunity to test every aspect of the sails,” says Bouzaid, who is very pleased with how the sails have performed.  “It was the first time we were real able to test the boat and the foil system was working well.” Conditions on the yacht were testing and – predominantly – very wet due to travelling at such high speeds.

Bouzaid left the boat in Portugal, with Hugo Boss undergoing another full week of testing before Alex departed single handed for the USA where he will prepare for the IMOCA Ocean Masters New York to Vendee Race on the 29 May which many of the other new Open 60s will be racing in. Despite the challenges of the capsize and the work to get Hugo Boss back to top condition, the boat is in fantastic condition and ready to compete. With seven months until the 2017/2018 Vendee Globe begins , preparations continue with Alex taking every opportunity to test and use the boat ahead of the Vendee start date.